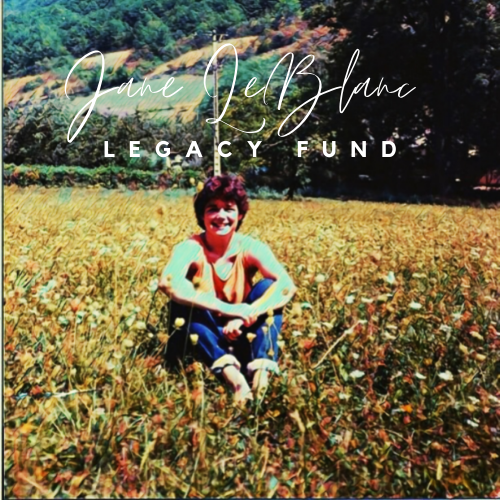 ‍Mission Statement: To nurture and develop emerging and seasoned creative artists in New Brunswick in honour of Jane LeBlanc.

‍Jane was a precocious and adventurous child. When she was very young, she traveled on her own and relished the freedom and fun. A gifted athlete and fun-loving person, Jane was a champion pitcher and actor in variety shows at school.

‍At 19 years old in 1983, Jane informed her parents that she was flying to Paris to be a nanny for two doctors. Once there, she took care of their children and studied at the Sorbonne.

After that, she traveled around the countryside, making friends wherever she was.Jane then befriended an older couple, and the three of them sailed around the globe to Venezuela, where she sewed fishermen's nets, to Africa, where they avoided pirates and wild seas. After that, Jane traveled to many countries and collected patches from them, which she sewed on her trusty backpack.

‍Eventually, now in her twenties, she made her way back home and attended St. Thomas University. She graduated from STU and was hired by NB Liquor, where she worked until her brain cancer diagnosis.

‍Jane then moved in with her sister Cat for ten years. Jane died in her mother's living room in Miramichi surrounded by friends and family in 2010. After her death, her sister Cat found 48 Journals that Jane had left her which covered her life from age eight up until her death at 46.