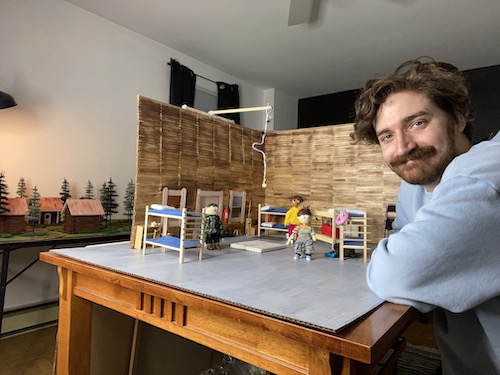 “My project is a stop-motion animated short film entitled Happy Campers. Stop-motion animation is something I spent a lot of time doing in my youth, and I’ve been eager to return to it as an adult. The film is based on my experiences at summer camp, and since it is in direct conversation with my own childhood, I figured this would be the perfect project to return to my old art form. Preproduction for the film is nearing completion, and I’m thrilled about the support the Jane LeBlanc Legacy Fund and Jane LeBlanc Creative Scholarship Award will give me for the project’s next stage. It’s a tremendous aid for the film and my development with stop-motion animation. I want to give a huge thanks to the jury and everyone involved with the Legacy Fund!"

Gordon Mihan is a Fredericton-based screenwriter and film director. He has produced and directed several festival-screened short films across Canada. His most recent short film Unofficial Selection won the Audience Choice Award at the 2019 Silver Wave Film Festival, and his previous short film, Coached, was broadcast on the CBC as part of the 5th season of the Reel East Coast, now available on CBC Gem. Gordon is a member of the NB Film Co-op.